Ahhh! That sweet sweet vanlife! One of the many times I stayed in a Walmart parking lot. I haven’t shopped at Walmart in years but since I have been utilizing their free camping so I thought it would be only fair to purchase some groceries. I did end up getting my first batch of cherries at this Walmart and it started a cherrey craze all the way to Whitefish Montana. But other than the cherries, Walmart groceries are packed with disappointment. Generally I would sleep great no matter where I parked. I had complete privacy with my window coverings and by turning on the fan and maybe some music the space inside my van would be its own little cozy world. The Walmart parking lots were always busy with campers in the back of the parking lot. 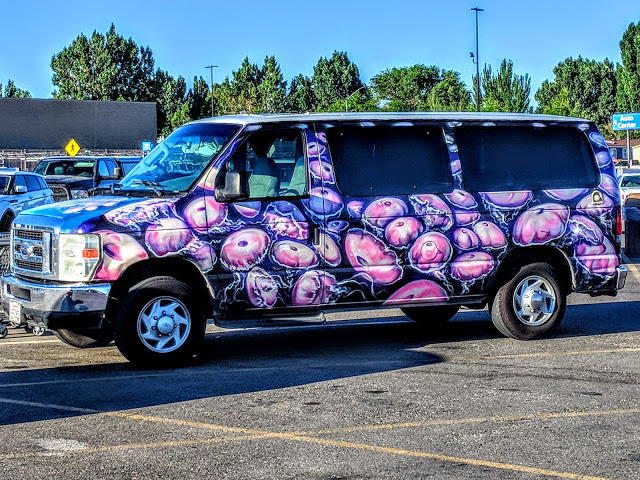 You really see the whole gamut of nomads and RV/Vandwellers. Here is a jellyfish van parked in the Walmart in Rock Springs Wyoming. It was hot as hell here!

Thanks for sending my hat and thanks for the gift card Mike! It was nice to get a little care package on the road.

Here was a campsite I found off of freecampsites.net that was just a few miles from the trailhead. I stayed here for about 4 days total.

Earlier I had made my way to Pinedale and got some resupplies and prepared for a 3 night 4 day backpacking trip in the Wind River mountains in central Wyoming. I had been dreaming of this hike for years after following several hikers recommendations in the past. 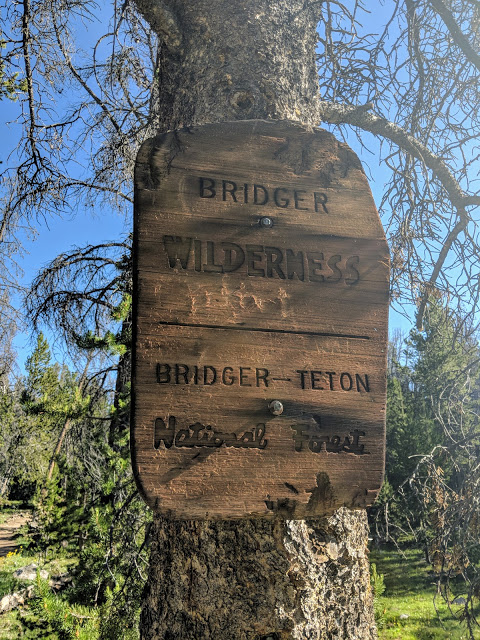 After a good nights sleep I got up early and was on the trail by 7am. I was very excited for this hike. I had planned a large loop crossing 2 major passes and a side trip to the legendary Titcomb Basin. I brought my bear canister and felt the large load of food, water, and a full pack. Me being excited I put it into high gear and trekked into the Bridger Wilderness.

Immediately I was treated with spectacular views of the range.

Wind River Range is full of granite and water! 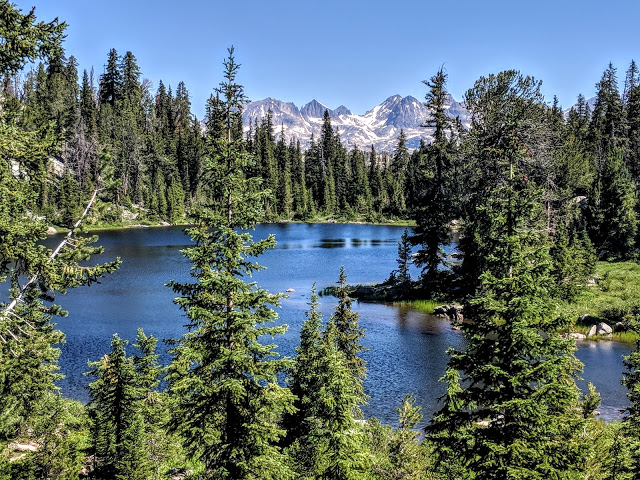 Lots of tributaries and streams. I love the light colored granite that forms the range. Coming from the Pikes Peak area of Colorado I am used to seeing the pinkish colored decomposed granite that dominates that area, it was refreshing to see such pretty rock all over the place.

The trail was well constructed and bobbed its way in and out of lake basins. I must have crossed 10 lakes by this point! 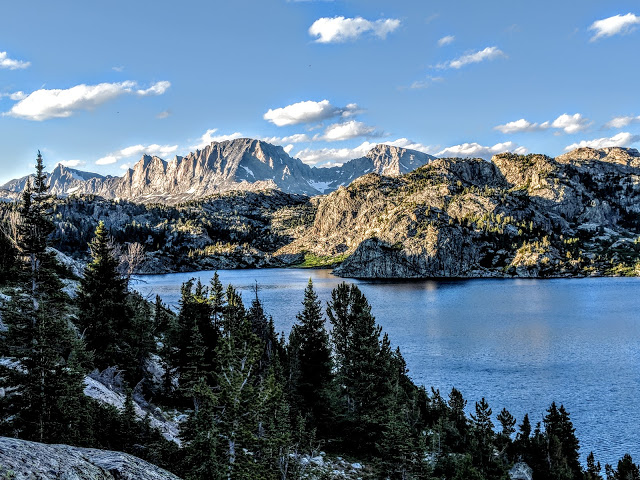 Unfortunately I had to pull the plug on the hike and camp much sooner that anticipated. About 6 miles into the hike I was cruising along with my earbuds in when I notice a sharp pain in the arch of my foot. I take a few more steps, then again, a very sharp pain! I knew something was wrong immediately and took a break to rest my foot. After a short break my foot was still hurting and made the decision to camp at a Seneca Lake and call the day after only about 10 miles. I had planned to hike about 20 miles that day but looking back my body was not ready for that much distance with the load I was carrying. Also I had some new shoes (Altra Lone Peaks 3.5s) that barely had any arch support with the stock insole. Later I put a pair of green Super Feet inside the Altras and they have been great ever since. So long story short I had to cut my 3 night 4 day trip down to a 1 night 2 day trip. In the long run it was a great decision to call the trip, rest, then make my way back to my van the next day.

I had a lot of time that day after pitching camp and just enjoyed the views of Seneca Lake, listened to music, and took some pictures. I also snacked a lot since I had a bunch of backpacking food I would no longer need.

It was a good campsite and enjoyed the sunset. I always enjoy a good sunset.

That next morning I was up early and made my way back to my van. I was disappointed that
I did not get to do the whole loop that I planned and missed out on Titcomb Basin but still was very impressed with what I did get to see and really enjoyed my time the best I could. My foot was hurting on the way back still and I was reassured I made the right call. 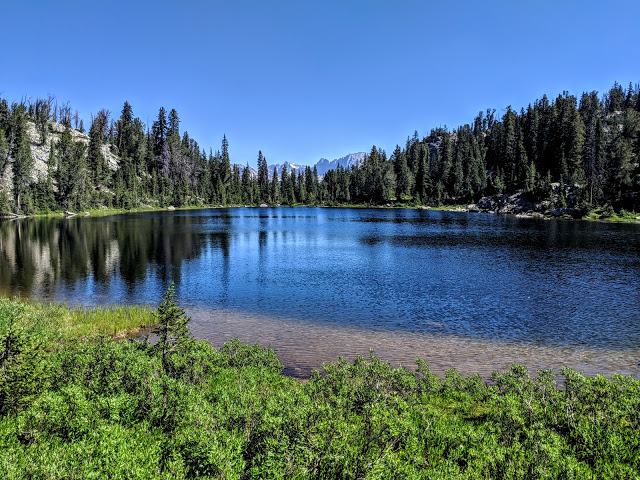 I had brought my Tenkara fishing rod on this trip and was having trouble catching anything until I tried my hares ear lure at Beauty Lake. 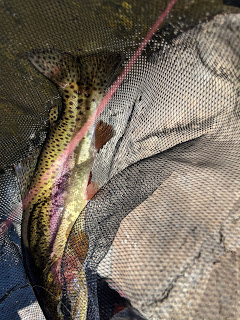 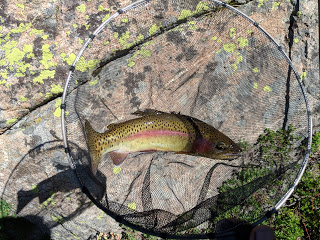 I ended up catching 2 little brookes and was pretty satisfied to have finally caught something. 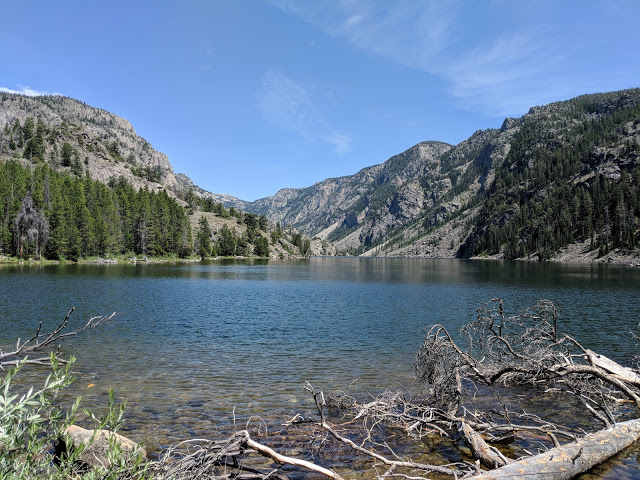 I took a day to rest in my van and made one more day trip to a lake nearby called Long Lake. It was a steep 3 mile hike to the lake. My foot was still sore but I could tell it was already getting better after a days rest. I brought my spinner rod down here and fished for a couple of hours. It was windy and the fish were not biting.

So after 4 days at the Winds it was time to make my way north to Jackson Wyoming. One of my vanlife strategies is to try and arrive at a new camping location mid week and avoid the crowds on the weekend. I was looking to arrive in Jackson on a Friday but decided to pull over at this peaceful spot just off the highway in between Pinedale and Jackson to burn a couple of days before arriving in the busy town of Jackson. It turned out I was tired from all the excitement in the Wind River Range and needed a couple of days to chill out anyway. I spent 2 days resting and reading the book The Dog Stars by Peter Heller. This book had me on the edge of my seat and turning pages for hours. It had been a long time since I  have read like that if ever. Thanks Paul for lending me one of the best books I have ever read. 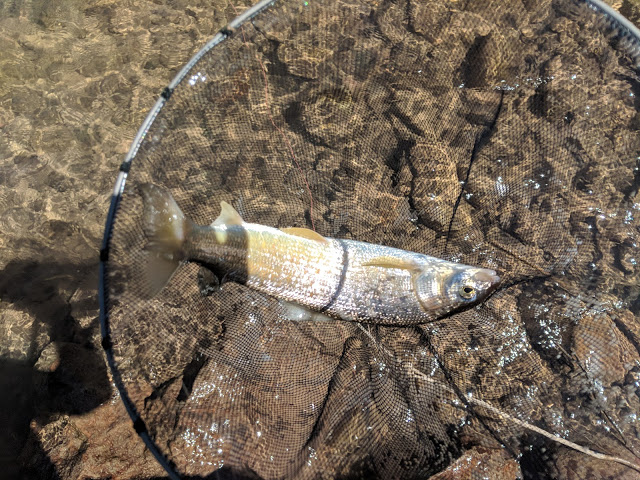 On my way to Jackson Wyoming I stopped along the Hoback River and threw out a line. I caught this carp. It was a shock how ugly this fish was after catching beautiful trout all these years.Yes I thew this guy back!