I have been on the fence for awhile about snow shoes. It looked like there is
potential for some fun but wasn’t sure it would be worth getting a pair. I had a chance to try a couple different sets and was able to get a good idea of what I wanted in a snow shoe.

I ended up with a set of Atlas 1230s that had a floating binding, suspension, and lots of traction. They are long too! I think it was worth it especially after going on that adventure last night. Even with a dry winter like this year, these shoes could get a good bit of use. 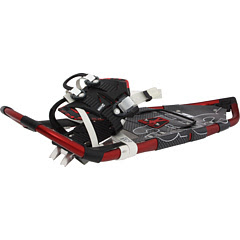 I have only used snow shoes in Monument, but wanted to give the Crags a try after a decent snow storm hit the area.

On they way up the pass there was not much snow and was wondering how conditions would be. When I got up to the trail head there was at least 2- 3 feet of fresh snow!

So after a little adjustment, the new snow shoes were working perfectly and was was making some ground. I started late in the day and only ran into other people on my way up but nobody on the way down. It was a perfectly clear day. Probably about 15 deg so the air was cool and crisp.

The snow was very deep and going off trail was very difficult. So it was a blast to stay in the “rut” so to say.

So I took a break, melted some snow in my jetboil and made some hot coco while I ate a turkey sandwich. The sun had gone down and it was getting dark. I could not believe how quiet and peaceful it was…

So the moon came out and it was time to put the lights on.

Back to the car and about a 45 minute drive home. I am really looking forward to taking out the snow shoes again. Great way to enjoy the trails in the dead of winter.