My magical minivan that takes me to magical places.
My research told me that Whitefish was going to be a stellar mountain biking destination. Whitefish has several large trail networks including a bike resort. While the town definitely has a resort/touristy vibe its a good one. I stopped by the local bike shop to get the skinny on camping and riding and found out dispersed camping is a bit different out here. Even with the shops advice it was tough to find a good camping spot but I was thankful they took the time to point me in the right direction. This will be my last town stop before reaching Glacier National Park.

A rare peek inside the captains quarters. 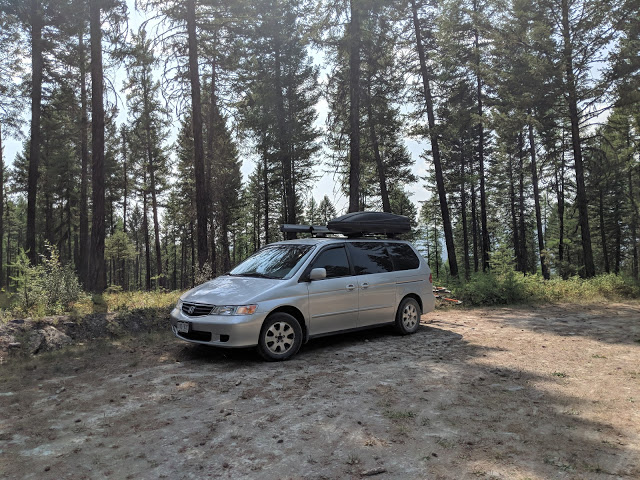 After searching around on the dirt roads for a while I settled on this small D shaped pull out off the side of one of the forest roads. It ended up working out great. There was hardly any traffic and it was nestled right next to the trail. The spot was nice and flat and ended up not having to level to van. 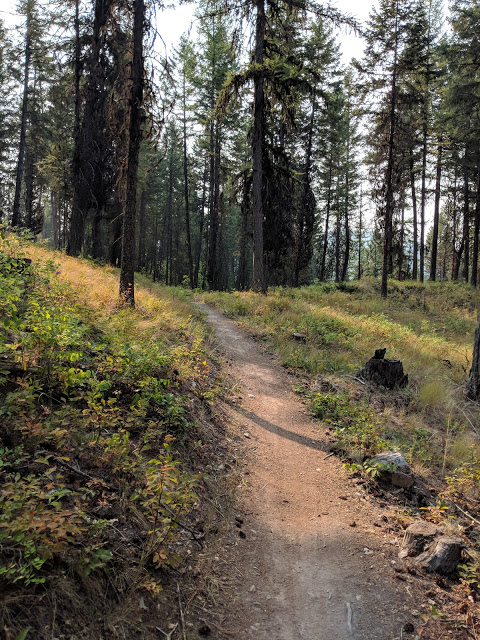 Whitefish is working on its own network of trails that should oneday surround the lake and town. The trail is well manicured and very flowy.

The climbs were gentle and the descents were fast. The trail was built with mountain bikes in mind.  The vegetation here is amazing. The air was smokey and there was a good bit of both hiker and biker traffic but everybody was having a great time. 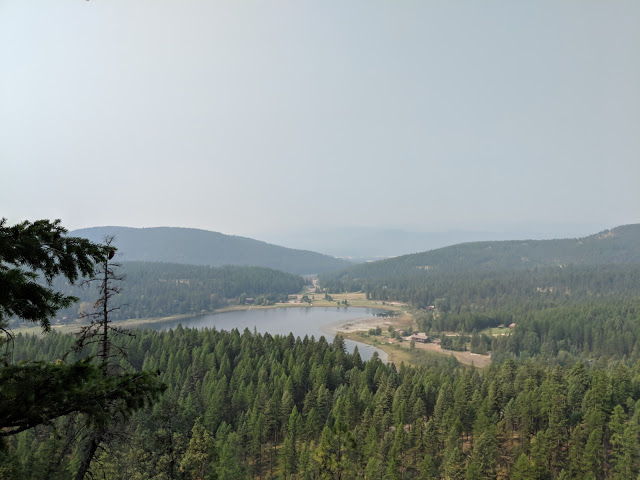 Views of my second ride on the Whitefish trail. 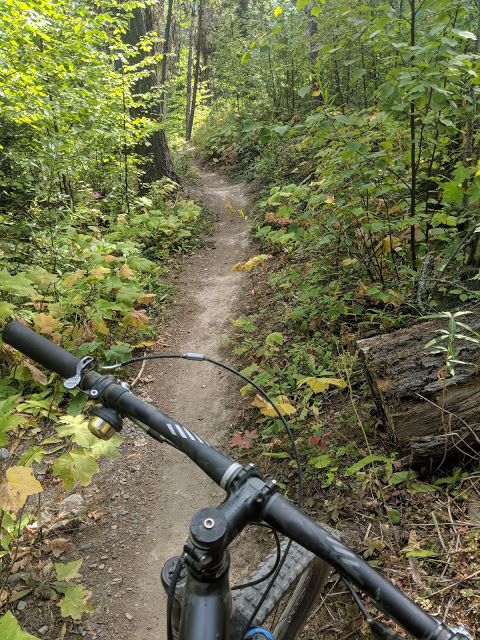 More ripping well made singletrack. The Whitefish Trail had neal little side trails you could loop up.

Just a hint of fall in the air. It is late August and I am far north almost to the border of Canada.

I met a nice middle aged lady at this overlook and we talked about my travels and she told me how she moved to Whitefish from Central California. She was a bit bothered by the smokey air and very afraid of bears.

After spending a couple nights camped next to the Whitefish Trail it was time to move on. I had some time to burn so I stopped into town and and walked around. It was the weekend and the town was busy! A festival was kicking off nearby to benefit the local trail system. I ended up cooking dinner at the train station while listening to bands playing off in the distance. There was a nice patch of grass with a picnic table where I cooked up some burgers near the tracks.

Whipping up bacon burgers with sweet potatoes, peppers, and onions. 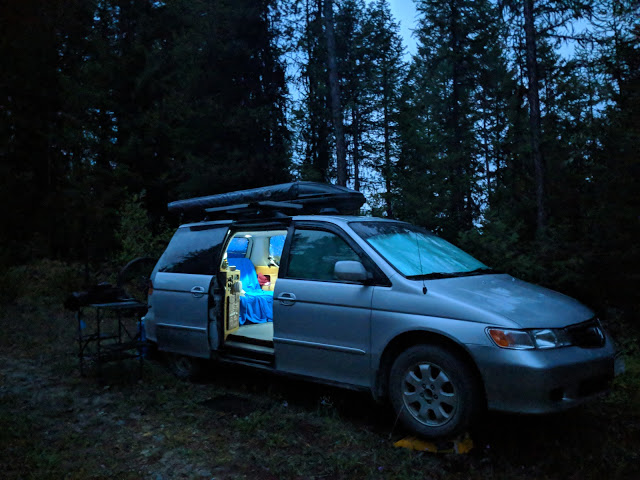 I headed out to the Talley Lake area in the Flathead National Forest. I found a campsite up a narrow dirt road deep in the trees. I ended up staying here for a few days to ride the Reid Divide trail that was recommended to me by the Whitefish LBS. Then ended up waiting out a 2 day storm that was slowly moving thru.

After a long fairly easy dirt road climb I reached the start of the Reid Divide Trail. 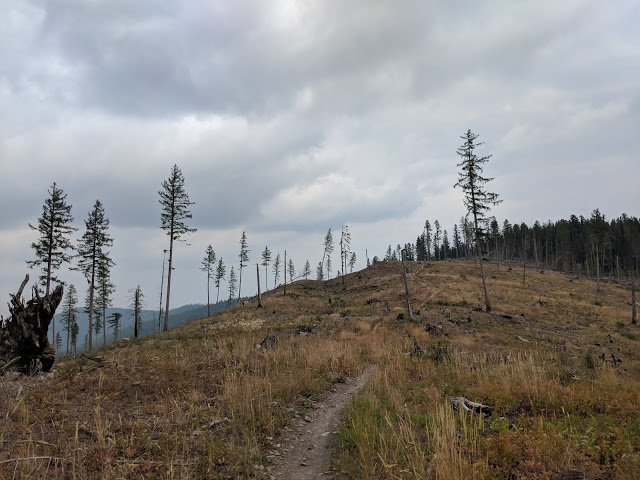 You cross a burn area on a short climb along the ridge.

The single track was very tight and at some points it turned into a green tunnel. 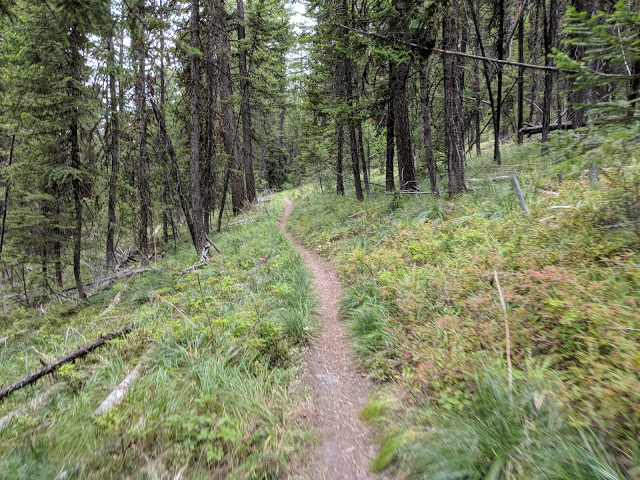 The trail turned downward and it was a fantastic descent. Fast, rough, with lots of rocks and roots to negotiate. The vegetation and trees were flying by as I made my way down the ridge.
Zipping along lush singletrack near the end of the Boney Gulch Trail. This turned out to be another top ride I discovered and should have ridden it twice.

A crappy cold front moved thru and it rained for hours with a little snow mixed in. During the breaks in weather I would get out and do some hikes on the narrow double track that winds thru the Flathead National Forest.

This storm turned out the be a huge blessing. The winds and rain  cleared the heavy smoke from the air and for the first time I had crystal clear views in Whitefish. My next destination is Glacier National Park and I did not want to visit this beautiful park with all my views socked in by smoke. It turned out I was in for a real treat! Hear I am packed up and ready to leave after my wonderful stay in Whitefish Montana. I would definitely come back.